Wow. I have *almost* no words for the last few months, but let’s be real – I wasn't built with a mute button! As you know, I competed in my first Olympics in the 5000m this summer. Writing this still makes me shake because at times I just can’t believe it happened! To describe my entire Olympic experience would take a full novel or feature-length film, but I’ll give you a feel for some of the feelings and memories.

1.       The Olympics are both overwhelming and underwhelming. Overwhelming because everything is just so big and exciting and going on all the time – my FOMO was out in full course. Underwhelming because at the end of the day, the main event is still just a race – still 12.5 laps for me, still freaking hard! I felt the most grounded was when I was training or racing, because a track is a track anywhere in the world and running was the most familiar thing I could experience. 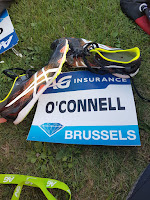 2.       Attitude is everything, and it’s fluid. After the Olympics, I returned home to Calgary for a few days and continued to train as I was entered in the Brussels Diamond League 5000m. My bumpy road to Rio prevented me from running many races this season, and  I wanted to test myself in one more high-quality 5000m. Plus - my Olympic race was disappointing, and I was eager for redemption. I was emotionally exhausted, and my workouts post-Rio were mediocre at best, atrocious at worst. Still, I traveled to Brussels hoping that my knowledge of exercise physiology wouldn't let me down and that my fitness had not in fact completely dissipated, as it felt. Upon arrival in this quirky European city, I immediately underwent an almost out-of-body attitude shift, and was filled with gratitude and excitement. Running in DL meets while spending a week in Europe is literally a dream come true, and I was so so lucky to be there! I realized that there was truly no “worst case scenario”, and suddenly powered by gratitude and confidence ran one of the most enjoyable races of my life, finishing in 15:07 which is only a second off of my PB. I was really proud to be able to show my true fitness and end the tumultuous season on a high note.

3.       It isn’t over till its over. In spite of running a qualifying time the year before, there were many times over the past year where I wasn’t sure if I would be in Rio. Just as I would get a solid training block in and return to form, I’d endure some sort of injury requiring anywhere from a week to a month off. To say this was no fun would be a slight understatement, and probably why I avoided blogging for the better part of the year – writing down adversity makes it more "real". The relentless support of my coach, teammates, and family kept me going when my self belief wavered, and for that I’m grateful. I saw many athletes go through similar struggles, and I’ll never know why the odds were in my favour and I was able to be fit at the right place at the right time, but I'm sure happy it worked out.

4.  People are incredibly kind. I’ve never doubted that, but the outpouring of messages, cards, and well wishes will stick with me for the rest of my life.  I am still dumbfounded at the number of people who told me they woke up to watch my race, which was at 6:30AM Calgary time (hellooo….beauty sleep!). Amazing sponsors (Asics Canada, Stoked Oats, Ultima, Elevate Me) and therapists (Movement Sports Therapy, Complete Chiro and Sport Therapy, Marcin, Robyn) generously ensured I was as prepared as possible. As well, I will forever be indebted to the U of C Dino’s crew who paced me and Maria through some make-or-break workouts. Scott, Mike, Doug, and the rest of you – thank you so much for volunteering your time and putting yourself through a respectable amount of pain to help us prepare better. Of course, the biggest thank you goes to my coach Mike Van Tighem, who bore a huge amount of my stress pre-games, and has been the most selfless, generous constant through this adventure.


The Olympics is just one big summer camp for adults. OK – enough with the sentimental stuff, here's what you are actually curious about!. Yes, there was a FREE McDonalds, and often the line was hours long. No, I didn’t see many mosquitoes and I really wasn’t too worried. Yes, Rio is absolutely beautiful. No, I never felt unsafe. Sadly I am not BFFs with Bolt or Phelps, but I did get to spend a lot of time with our Canadian superstars like Brianne Thiesen and Melissa Bishop, and I can assure you that they are just as awesome as they seem in Nike ads. The parties were big but the team Canada cheer squads at the track every night were even bigger.  I certainly wouldn’t turn down another chance to go! ;) 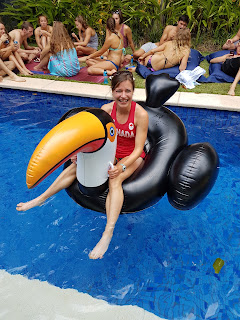 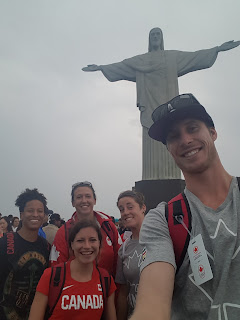 Since coming home, I’ve decompressed by living as a “normal” person for a bit – hiking, vacationing, and catching up with friends.  However, the itch to get training  is strong, and I’m happy to be slowly getting back to doing what I love – running more than any sane person should!! I'll leave you with a few more pictures - thanks for following!

Canadian Track and Field Olympian and Exercise Physiologist putting one foot in front of the other. Twitter: @jess__oconnell Instagram: @jessmoconnell